A LETTER TO HUDDAH MONROE

I must say that I have followed you on your quest to becoming a celebrity and now that you have somewhat arrived at stardom, I cannot help but wonder if the end justifies the means.

To this regard, I am writing this letter with the hopes of discovering the real Huddah Monroe and what makes her tick other than the flamboyant, lavish, sultry, inappropriate, make-believe lifestyle you flash all over social media.

Is there really any more to the infamous Huddah? Or are you exactly what your Instagram page or basically the entire Google search page makes of you?

Let me bring my oblivious readers up to speed.

Huddah Monroe is a Kenyan socialite who happened to represent her country in the Big Brother Africa reality show Season 13 (THE CHASE). She is a beautiful, bold and curvaceous young lady who at no time is ashamed of showcasing her curves oh so vividly.

Anyway, shortly after her eviction, her “naked pictures” were supposedly leaked on social media and since then, she has become a sensation with 500+ followers on Instagram and has uploaded 500+ of the most sensual, sultry not to mention inappropriate pictures that depicts her as a very sexual and seductive being.

It is so bad that sometime ago when I wrote a post quoting a statement Huddah wrote about men and cheating – read the post here, I searched and searched for a decent picture of her to use for the post but it was almost impossible.

All of her pictures either reveal her racks and buttocks in very disturbing way or just show her off as some kind of sexual toy instead of the young beautiful and I hope to believe intelligent lady that she is. 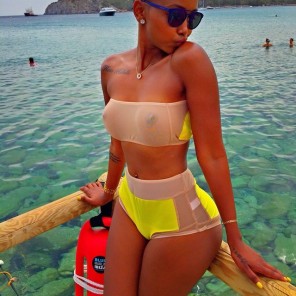 Once again Huddah, I have to ask, is there more to you than meets the eye? Or are you simply just out for the internet fame?

If the former is the case then why do you choose to portray yourself as a sexual icon that some might perceive as beauty with no brains?

Or maybe the latter is the case and you aspire to be like Kim Kardashian-West.

Well, if that’s the case then I must also say that you have fallen short in that department as well because unlike you, Kim and the entire infamous Kardashian clan have found a way to leverage on their popularity and are gradually building an empire.

As a matter of fact, I take back my commendation about the Kardashian clan.

You (Huddah), Kim and every other female celebrity that think it is okay for women to expose themselves in the bid to get popularity is what is wrong with the world today.

Especially you Huddah, given that you are from the African part of this word where conservation is preached. What message are you passing across to the young girls that look up to you?

How do you expect them to act when they see you put up pictures of a man grabbing onto your gluteus maxims? Don’t you realize they might just think it is okay to post a picture of a man doing the same to them?

Isn’t it funny how in the picture above, the face of the guy doing the “grabbing” is hidden to protect his identity I believe but Huddah on the other hand doesn’t mind the world seeing this picture of her. What a shame!

As much as it is none of my business how you live your life, I would honestly like to know what goes on in your mind because even in my most vulnerable state, I would never be able to put up one-tenth of the kind of pictures you have put up.

Not because I am a saint but I guess I’m not as fame thirsty.

I also need not mention the issue about repercussions because from the look of things, you clearly couldn’t care less.

I wish you all the best Huddah and I hope that one day, you would desist from your indecent practices or maybe take advantage of your ill gotten popularity and build your own empire so it doesn’t seem like the world got a peek at your private body parts just for show or like my Nigerian brothers and sisters call it, OSHO FREE!

Why do you think Huddah Monroe is so sultry and inappropriate on social media?