HOW I POTTY TRAINED MY DAUGHTER IN 10 DAYS

Welcome to Motherhood Monday guys! Every first Monday of the month, I share unconventional tips for mothers, fathers, expecting and aspiring parents alike.

Today’s post is about a particular phase that a lot of parents struggle with in their kids; potty training. Sometimes, you have cases where a three, four, five year olds and even older kids still need to wear diaper or waterproof mattress cover when they sleep to prevent “bed wetting”.

Like I said, potty training is usually a very daunting phase for parents especially mothers and majority of them leave it for their teachers to handle whenever the child starts school so they would not have to go through the stress of it all.

Now the essence of this post is to let you know that there is no cause for alarm. I am going to share with you how I potty trained my EIGHTEEN (18) month old daughter in less than TWO WEEKS.

Yes! I said EIGHTEEN MONTHS! And I also said I potty trained her in less than TWO WEEKS! I will walk you through the steps as you proceed with the article.

First things first, we need to understand that potty training should not be seen as a task or as hard labor that requires a lot of work. Instead, it should just be taken as a regular way of life for you and your child.

Secondly, please forget all these things you read on the internet about potty training in three days or even one day. How ridiculous! It is biologically impossible!

Thirdly, CONSISTENCY is the watchword in potty training. So you MUST start when you are ready so you can see it through to the end. The worst thing you could do to a child is start and give up after three days because you have to travel. Not only are you succeeding in confusing the child, you are making it difficult for him or her to grasp what it is you’re trying to impact.

Fourthly, after you ascertain you are ready, you MUST wait until your child is ready as well. For me, I actually attempted potty training my daughter at fifteen months but I realized she wasn’t ready because she never wanted to sit on the toilet. Usually, it would take some struggling and cajoling and when she eventually did sit, she would do only number one (pee) and never number two (poo).

Let me just mention that as for me, I use a toilet trainer and not potty simply because it is usually a hassle teaching the child to use the toilet after they have mastered using a potty. So I played smart and skipped one step to make things easier for me by going straight to using the toilet with the help of toilet trainers that enables children sit on the toilet unassisted. With additional toilet steps, they could use the loo without your help to get up there. 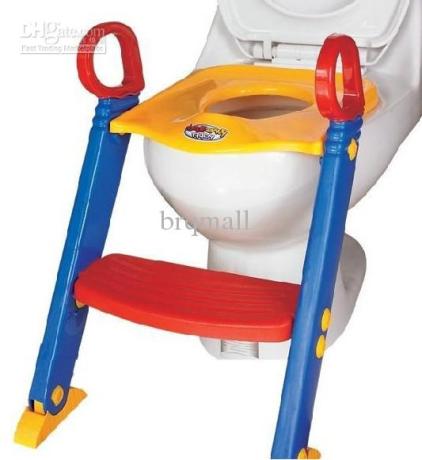 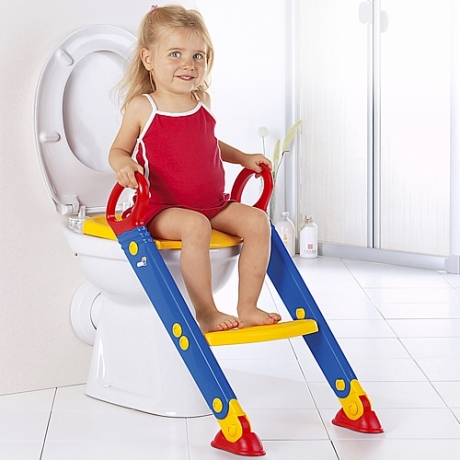 So when I realized she wasn’t ready, I put it on hold for a few months until she turned eighteen months then I tried again. So whatever you do, DO NOT rush your kid or force them to sit in a potty or toilet.

Fifthly, NO DIAPER/PULL-UPS! Forget about all of that. As a matter of fact, you could go commando (bare buttocks) during potty training but just panties would be fine. Not diaper panties but regular panties. Only use diapers during naps and at bedtime after which as soon as your child wakes up, the diaper should come off. Let this continue until you are ready for nighttime potty training.

NOTE: I strongly recommend potty training for daytime and nighttime at different times so it gives the child the chance to master one before the other. Nighttime potty training would become a lot easier if the child has achieved total bladder control during the day than it would be if he/she still wets her pants during the day.

Give your child a lot of water or juice to drink so they feel the need to pee a lot during the day. If you give juice, remember to dilute it a lot so the child doesn’t consume too much sugar that might lead to a purge. My daughter usually drinks a lot of water on a regular basis so this was a piece of cake.

Next, you have to set your timer for fifteen (15) minutes. Yes! It may sound like a lot of work but in a little over a week, you would never have to buy diapers EVER AGAIN!

Once again, you have to take your child to urinate every FIFTEEN MINUTES throughout the day until nap time and bedtime when you could wear diapers. But remember, as soon as your child awakens, you MUST take off the diaper, put her to urinate and then put her panties back on.

The whole essence of NO DIAPER is to know when the child messes himself up. That way, he or she would also know that he wet himself and that natural human sense of sanitation would kick in followed by your words of encouragement telling the child not to pee on himself again then you show the child where he should pee if he feels like peeing.

Repeat step one for ONE WEEK! Yes! I said ONE WEEK! Keep giving your child lots of water and taking him to urinate EVERY FIFTEEN MINUTES for ONE WEEK.

NOTE: For potty training boys, let them sit down like girls do UNTIL they have completely mastered the act then you could teach them to aim into the toilet by playing games of Cheerios where he aims to hit the cheerios in the bottom of the toilet or potty for a prize.

After one week of Step one, increase the time you take her to the potty to TWENTY MINUTES. At this time, you would notice her bladder control has actually improved as she would be able to hold the urine in for that extra five minutes which you added.

Please bear in mind that there would be accidents which are completely normal. So don’t feel like you are not getting it right if your kid pees in the toilet the first three days then wets herself on the fourth day.

It is important you remember to encourage your child and not scold or spank. All you need do is remind them they are not meant to pee on themselves and then show them where it is they should pee.

Repeat Step three for another ONE WEEK.

Now this was the step where my daughter grasped the entire idea of potty training and came up with her own “pee signal”.

After continuing all of these steps and taking her to the toilet ever fifteen to twenty minutes for ten days, on the eleventh day precisely, I observed that whenever she actually needed to pee, she would come to me whilst pointing at her buttocks and humming at the same time. And when I took her to the toilet, she actually did her number one’s and number two’s as well.

It took me a while to understand her signal but I eventually did and believe me SHE IS POTTY TRAINED! Just like that! In TEN DAYS!! However, I still continued with the remaining steps so as to enable her perfect her newly acquired skill.

If your child still hasn’t grasped the concept, not to worry. Just increase the bathroom break time to thirty (30) minutes and remember to be consistent.

NOTE: It is important to continue this sequential bathroom process even when you are outside of your home on visits or trips. It is preferred to potty train when you are going to be home all through. But if you must go out, put on diapers just to avoid any public embarrassments but remember to continue with the bathroom breaks. As for me, I use Pull Ups so it’s easier to take off and put back on. Diapers can take quite tasking.

Make sure you take her to pee before you leave the house and as soon as you get to wherever it is you’re going. Then continue the fifteen, twenty or thirty minutes bathroom timer you have going.

Repeat Step five for ONE WEEK!

At this stage, it had almost been three weeks since I began potty training and I also noticed that my daughter now had dry naps and surprisingly, dry nighttimes too.

Basically, even though I wear her a diaper at nap and bedtime, she still didn’t pee in them because she had mastered the act of bladder control so it probably felt uncomfortable peeing on herself. But I still wore them anyway and continued with the remaining steps until I was ready for nighttime potty training.

It is important to note that children learn on their own pace so the fact that my daughter was potty trained in ten days doesn’t mean yours wouldn’t do it in a shorter or longer period of time.

The most important of all is to STAY CONSISTENT! And if at this time he/she hasn’t grasped the concept, increase the bathroom breaks till ONE HOUR. So every hour, take her to the bathroom to urinate.

Repeat Step seven for ONE WEEK!

Increase the bathroom breaks to TWO HOURS for another week. Keep adding an additional hour on a weekly basis until you achieve your aim.

This continuous measure teaches the child to control the bladder and even though some kids might take longer, they EVENTUALLY grasp the concept.

Your child is potty trained. Hurray!!!

Finally, you can cross out the expenses of buying diapers.

Visit the blog on the next Mothering Monday; the first Monday in May to read on the steps for Nighttime Potty Training.

Do you have an easier way to potty train that has been tried and tested?

Feel free to share your comments, opinions and suggestions.